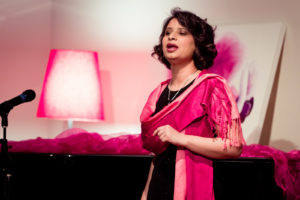 As whatshisface once famously said, “What’s in a name?”  A rose is a rose, by any other name.

Yet, when it comes to Yoni Ki Baat, (the South Asian adaptation of The Vagina Monologues), it’s the name that triggers most impressions – involuntarily or otherwise.  A raised eyebrow here; a roll of eyes there – all in a predictable blend of curiosity, discomfort, shock, disdain, and curiosity (which deserves to be mentioned twice). There’s an urge to know more, often overcome by the tendency to ask less, or not ask at all. Seriously, who would really want to ask about anything that has to do with the garblemutteromgVAGINAdidIactuallyjustsaythatword??

But if you let your curiosity get the better of any embarrassment, you will be opening yourself to a very potent space of courage, truth, struggle, joy, sisterhood, power and believe it or not, sanctity. Eye-opening to some, identifiable to some others, but riveting and very real to all.

I remember I saw the original Vagina Monologues by Eve Ensler about a decade ago. If you’ve ever been a film and literature student just out of your teens, you must know all too well the cocky feeling of “I’ve read about all the aberrancies and crude reality of the world; there’s little that can shock me now!”  I went to the play with a bunch of friends assuming the title was a metaphor; an allegory to life from a woman’s perspective. Boy, was I in for a surprise! Admittedly, the play was way too literal for my taste. I had paid for the ticket, I was already inside the auditorium, and there was nobody to judge how I’d react. Yet, there I was, rapidly trying to solve math puzzles in my head, as if someone were watching me watch the play. I came out with the aftertaste of a bad movie, relieved it was over. I’ll never know how I would have reacted to the play had I first seen it only now.

“Um yeah, and thanks but no thanks!” I had wanted to say – and I would have, had I known her as well as I do now. I couldn’t help thinking the title sounded even more weird in Hindi. Even then, whether it was because of the decade that had passed or the cards life had dealt out in the meantime, I was somehow a lot more receptive to the idea of South Asian women talking about their bicycles [hey, what’s in a name, remember?!]. Over the year, as B and I grew closer, I had heard enough about YKB and the bond they shared and the powerful space to want to see it for myself.

I finally attended YKB in 2010. I was stunned. This wasn’t a bunch of teenage girls giggling about vaginas. (Not that there’s anything wrong with a bunch of teenagers giggling at vaginas – it’s just that I won’t pay to watch them giggle on stage.) These were poised, fearless women with real stories. All their own; some mine and very likely yours. Stories including, but not limited to sexual abuse, domestic violence, joy, sexuality, coming out, love, body-image, relationships, the subtleties of corporate culture, harassment at work and so many more. The air was tense, with light specks of comic relief. These were women who had gone through their struggles all alone, healed themselves together, and emerged winners. One could sense the energy, their bond of sisterhood, which in turn created a very strong bond with the audience.

There were as many men as there were women in the audience. And yes, people of various ethnicities. Tasveer was mindful of the power this space generates – no, I do not exaggerate when I say power – they had trained aides at every exit, in case anyone in the audience felt overwhelmed and needed to step out for air.

That’s the beauty of YKB Seattle – it’s not a pre-conceived script pulled out of a playwright’s vision. The stories are all very authentic, all written by local South Asian women; which means the dynamics of YKB change with every new participant, every new story, every year.  This was the metaphor I was looking for a decade ago. A riveting, eye-opening, spellbinding metaphor. Yoni Ki Baat was not a play. It was an experience.

And while it’s difficult to justly explain everything that YKB is – for that’s something you will know only when you experience it – let me attempt to tell you what it is not:

YKB isn’t about a handful of self-appointed “feminists” bashing men. Nor is it an underlying agenda by some feminist organization. It isn’t a solution to your problems, much as it may inspire you to take a step in its direction. It’s not therapy, much as you may feel it has been quite therapeutic. It is not only for women, much as it is about and by women. It’s just a space – a very powerful, inspiring, supportive space where a few strong women have garnered the courage to step up and speak out what most fear or shy from. It’s your space, whether you are South Asian, a woman or neither.

If you choose to attend, I promise you, you will not be sorry.  If you’re uncertain, I’d say go for it – at worst, it’ll cost you one evening and a Chinese take-out; at best it’ll change your life (not exaggerating). If you’re not yet ready to stomach it, that’s alright. YKB will still be here and going strong when you think you are. If it helps you decide, here are some audience reactions from last year.

A few years ago, I would have said go ahead and give it a chance, despite your reservations. Now, some years and couple grey strands later, I’ll say this: Go ahead, give yourself a chance. You’re sure to go home a richer human being.

Tickets are going with every blink of an eye, folks! Do get yours now: